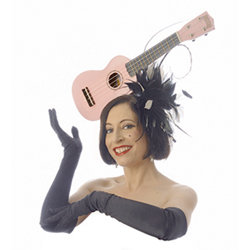 Fall under the spell of a little instrument with a big fan-club as London cabaret's Queen of the Ukulele Tricity Vogue shares the fun of the four strings. This jewel in the free festival's crown returns for its third triumphant year at the Fringe. An ever-changing line-up of international ukulele stars competes nightly for a prestigious Uke of Edinburgh Award - and there are ukulele and kazoo sing-a-longs, so everyone gets to join the party. 'Witty, charming and hilarious cabaret' (TimeOut, London Critics' Choice). 'What the free festival is all about' **** (ThreeWeeks).

Tricity Vogue's Ukulele Cabaret returns to the Laughing Horse Free Festival bigger and brighter than ever in its new home, the Counting House Ballroom. Back for a third year, the show features cheeky musical comedy with plenty of rowdy sing-alongs - audiences are invited to bring their ukuleles and kazoos, and to vote for each night's prestigious Uke of Edinburgh Award.

Winners of the tongue-in-cheek title earn the privilege of strumming the Uke of Edinburgh itself, a real ukulele worn by host Tricity Vogue as a hat. Last year Tricity had her head played by international punk cabaret icon Amanda Palmer (The Dresden Dolls), Fosters Comedy Award nominee Thom Tuck, and author Mark Wallington, who immortalised his victory in his Radio 4 Book of the Week, The Uke of Wallington.

Attracting crowds of regulars with its laid-back comedy and audience interaction, the show was selected to appear on Mervyn Stutter's Pick of the Fringe, and awarded four stars by ThreeWeeks, who described it as "what the free festival is all about".

"Last year a rock star strummed my head, a juggler tossed three of my ukuleles in the air, and I threw a dart at a comedian's balls," says Tricity. "I was aiming for his dartboard, honestly. I did warn him I couldn't throw. Luckily I'm better at the ukulele than I am at darts."

This year Tricity will treat her contestants more kindly. For the first time in the show's history, the diva will write a song for every Uke of Edinburgh winner, on a subject of their choosing. She'll then perform their song live at the next day's show.

Hosted by London cabaret's queen of the ukulele, Tricity Vogue. "Tricity Vogue and her uke... recipe for one of the finest shows you'll see" Time Out, London Critic's Choice

Sarah-Louise Young. "A force to be reckoned with." ***** Three Weeks

Mark Wallington. Author of Radio 4 Book Of The Week The Uke Of Wallington.