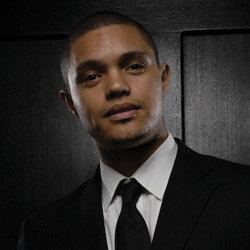 Well, not really. South African comedian Trevor Noah is making his Edinburgh debut, presented by Eddie Izzard. Coming-of-age in post-apartheid South Africa, Noah shares his story with this exploration of race and place.

Trevor's explosion onto the South African entertainment scene has been all encompassing, taking on TV, radio and his first love, stand up comedy, which he has performed on both local and international stages including the UK and US.

Trevor has been performing for a little over two years but is already recognised as one of the top comedians in South Africa. His rise in the comedy realm has been nothing short of meteoric. His attributes as a comedian - sharp wit, intelligent commentary, unmistakable charm and clinical delivery have made him a very popular performer.

He has hosted numerous television formats in South Africa, including the country's Music Awards and the Television and Film Awards, and two seasons of his own late night talk/sketch show entitled Tonight with Trevor Noah. In 2010, Trevor's one man show saw an unprecedented national sold out theatre tour. He has presented the South African Comedy Festival for two seasons and his DVDs have sold more than any other comedian in the country.

His career highlights already include opening for international superstar Russell Peters on his South African Tour, charming audiences opening for Julio Iglesias on his tour of the country and being the only comedian in South Africa to have made the cut for the international audition of NBC's Last Comic Standing (US). Trevor has also recently performed on The Tonight Show with Jay Leno (US) - the first South African stand up comedian to do so.

He is also the subject of the film Township to the Stage which tells the story of Trevor's remarkable career in post-apartheid South Africa.