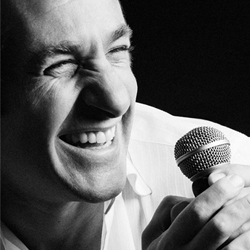 Tom Stade, star of BBC1's Live At The Apollo, Michael McIntyre's Comedy Roadshow and Channel 4's Stand Up For The Week, returns to the Edinburgh Festival with his eagerly anticipated new show Tom Stade Totally Rocks.

Raw, bold stand-up at its best, Tom Stade rocks showcases all the hallmarks that have made him one of the most exciting and sought after performers on the circuit - magnetic stage presence, irrepressible charm and first-class story-telling.

Tom had an incredible 2011. His eagerly awaited debut nationwide tour sold out; he received amazing reviews in Edinburgh for his show What Year Was That?, and due to overwhelming demand following his Edinburgh run, he added an extra 46 dates across the UK.

He has headlined everywhere from New York to Johannesburg; he's performed at comedy festivals around the world and entertained the troops in Afghanistan, Iraq and the Falklands. Hotly tipped as the next big comedy name, Tom offers a trip to his inimitable, offbeat world for a truly unforgettable hour of gags, anecdotes and spot-on observations.