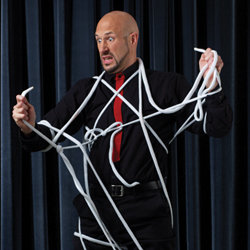 All the way from Switzerland! Gasp! at magic as great as English lovemaking. Chortle! at hilarious German humour. Swoon! at a magician as cool as Swiss yodelling. It's an hour of magical entertainment and surprising moments. And if this description so far sounds very disappointing, don't worry: he is a magician and therefore a chronic liar. Deadpan humour meets breathtaking magic. www.tomlauri.ch. 'Tom Lauri with his Wiz-Art show of cards and ropes conjured his way into the hearts of the avid audience' (Badische Zeitung).