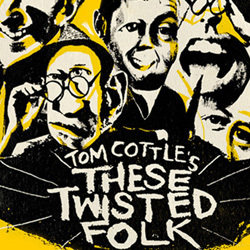 Michael Twist was born with baby girl's hands. Sad! Has this affected his life? Yes! Join this 87-year-old charmer, Tom Cottle - 'Comedy Gold' ***** (WhatsOnStage.com), 'You can feel a TV contract beckoning' **** (TimeOut) - at his flat (The Iron Belly) for lemon bonbons and an evening of twisted tales and strange happenings. A macabre look at humans, their insecurities and tangled idiosyncrasies. Imagine Roald Dahl meets Samual Beckett with some League of Gentlemen muddled in for good measure! Expect headless mannequins, real people and elongated appendages...

In 2009 and 2010 Comedy Bitch traipsed up to Edinburgh Festival with two face-melters of a show. With their surreal mix of dark, yet oddly naturalistic humour, they really did create a bit of a stir amongst critics, TV companies and reviewers alike.

Tom Cottle, one of the performers and writers of the aforementioned sextet, is performing his own comedy play this year with the help of his hilarious and talented friends. Taking his influences from such shows as Big Train, The League of Gentleman and Jam, Tom's created his own unique and heady little mix of odd ball characters and their peculiar and daily dilemmas. If Tim Burton wrote a 70's sitcom, then this would be it.

Tom is joined by The Grandee's Marny Godden, and Dan Lees who is half of Moonfish Rhumba.

So let's try to describe this show shall we?]

Has this affected his life? Yes!

Join this 87 year old charmer at his flat, (The Iron Belly) for an evening of twisted tales and strange happenings. Roald Dahl meets Samual Beckett with some League of Gentlemen muddled in for good measure.