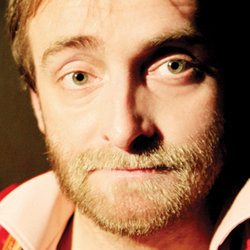 The true Spirit of the Fringe, multi award-winning, Perrier-nominated comedian, author, explorer and air recycler Tim FitzHigham is back with a brand new show and his most dangerous gamble ever. Tim is a man with bad ideas - he rowed the Channel in a bathtub, now he takes on his greatest challenge to date. Co-host of Maxwell's Fullmooners mayhem: 'Gut bustingly funny' (Scotsman), 'Inspirational' (TimeOut), 'A national treasure' ***** (Chortle.co.uk), ***** (Comedy.co.uk), ***** (TheDailyDust.co.uk), 'the perfect British Eccentric' (Dara O'Briain), 'FitzHigham is completely unhinged, completely without hinges' (Eddie Izzard).

Clown, adventurer and explorer, where does one begin to describe the madness that is Tim FitzHigham? Do we start with his two rather bizarre World Records? That he was made a Freeman of London, and a Freeman of the Company of Watermen and Lightermen of the River Thames? Or that he has a toilet named after him? What about the Morris Dancing from London to Norwich? Perhaps we should begin with the fact that he is the Commodore of Sudbury Quay, the Pittance of Selby Town and Waterman to the Mayor and Unitary Authority of Swindon?

This is just a glimpse into the weird and wonderful life of Tim FitzHigham, and somewhere along the line he's managed to come up with this, his eighth Edinburgh solo show. Last year, Tim's show Gambler garnered amazing reviews at the Fringe (did we mention that he's won the Spirit of the Fringe Award twice?), went on to achieve a sell-out run at the Melbourne Festival earlier this year, and Tim currently has a pilot development with Radio 4 for this show! He is also filming his own CBBC show Superhumans, due to air later this year.

Now the co-host of cult howling hit Maxwell's Full Mooners is back with a brand new show and his most dangerous gamble ever; how to make a letter travel 50 miles in an hour, using only the means available during the eighteenth century. Last year, Tim's discovery of gambling lead to a fractured toe and finger, a broken rib, his house going up for sale, and hospitalisation with a bone-marrow eating infection. What the hell will this year bring??!

Tim will also be appearing in Flanders and Swann this festival.