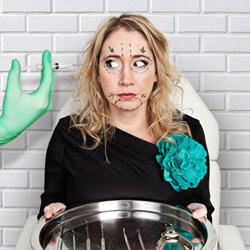 The battle against ageing is more than skin deep. Tiffany goes beneath the grimy epidermis to uncover class hatred, racism and sexism. Maybe it's time to start giving a sh*t... 'A stroke of genius, witty, well-constructed and full of jokes' **** (Sunday Telegraph). 'One of the best things to come out of Show Me The Funny, she is a rising star' (Evening Standard). 'Mouthy, cynical and sexually frank, she left us wanting more' (Guardian).

After a stellar 2011 that saw her finish in the final of ITV's Show Me the Funny & embark upon a her first nationwide tour, Tiffany Stevenson is back at the Fringe with her new show Uncomfortably Numb for the whole month of August.

In Uncomfortably Numb Tiffany discovers that the battle against ageing is more than skin deep. She goes beneath the grimy epidermis to uncover class hatred, racism and sexism. Maybe it's time to start giving a shit...with jokes.

Tiffany kicked off her comedy career in 2006 - as an actress she had already worked alongside established artists such as Ricky Gervais (The Office), John Bird (Chambers) and Stephen Fry (Absolute Power) Tiffany burst on to the Edinburgh scene with a lead role in the Eric Bogosian play Talk Radio, directed by Stewart Lee. The following year Tiffany teamed up with her Talk Radio co-star Phil Nichol & brought their sell-out London showOld Rope to the Fringe - it continued to have successful runs for the next few years. In 2010 she starred in Celebrity Autobiography at the fringe then in the West End alongside David Tennant, Michael Urie, Sally Phillips & Doon MackKichan, which received rave reviews.

TV wise she has performed on Comedy Central at The Comedy Store (Comedy Central) Never Mind The Buzzcocks (BBC) and the breakthrough ITV show Show Me the Funny last year where she was a finalist - performing a set at London's Hammersmith Apollo live to 3 million viewers. As an actress she has appeared on Footballers Wives, Comedy Cuts, The Office, Chambers, Balls of Steel, Dead Clean & The Days That Shook the World.

Her ballsy brand of comedy is rated by critics and fellow comics alike and she is tipped by many to be the female breakthrough star of 2012.