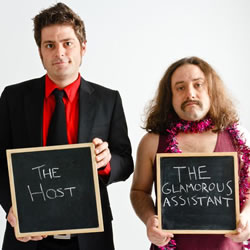 The live comedy quiz show that pits top stand-ups against each other for your amusement. Previous contestants include stars of TV's Live at the Apollo, Never Mind the Buzzcocks, QI, Mock the Week and Peep Show, so you never know who you'll see competing for the Universal Genius mortarboard. The show is hosted by award-winning comedian Mark Allen 'A total delight' (Time Out) with 'glamorous' assistant Eli Silverman. Rounds include poetry, science, languages, wit, etiquette and hunting. Yes, hunting. 'The bastard child of QI and Shooting Stars' (Chortle.co.uk).

But once the dust has settled, only one of the contestants can be crowned Edinburgh 2012's very own Universal Genius. Who is your money on?