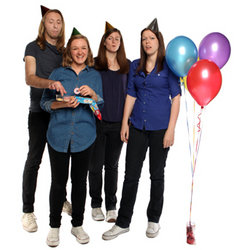 Anarchic funnymongers The Dog-Eared Collective are back to unleash more supercharged silliness. See them perform at the Underbelly throughout the Edinburgh Festival Fringe in their brand new sketch show You're Amazing (Now Look At Me).

The Dog-Eared Collective will take audiences on a weird and wonderful journey through their extraordinary world where you can see Paddington Bear drop a beat bomb in assembly, Glasgow bang out a bid for the Winter Olympics 2022 and the girl guides prod a political hot potato. This is surreal and inventive sketch comedy that has to be seen to be believed.

The Dog-Eared Collective are made up of Kathryn Hanke, James Huntington, Joanna Hutt and Jenny Thomson, who have been performing together across the UK since 2005, creating their own wildly surreal brand of comedy. After seven years together, with acclaimed shows including You're Better Than This, Joyride and Barnaby Brown: Orphan Extraordinaire, their new glorious anarchic hour promises to be as silly as ever. Come marvel at these fabulous funsters and their myriad of ingenious sketches.