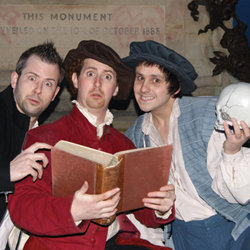 Play / storytelling performed on the following days in August 2012...

Thirty-seven plays, three actors, ninety-seven minutes. This fast-paced roller coaster of a show is anything but dull as you groove to the Othello Rap, indulge in Titus Andronicus - The Cooking Show, and try to keep up with Hamlet backwards. Join three madcap men in tights weaving their wicked way through all of the Bard's Tragedies, Histories and Comedies, leaving you breathless and helpless with laughter. Presented by Stratford-upon-Avon's Tread the Boards Theatre Company, winners of Best Play at Edinburgh Fringe 2010, awarded by DarkChat Reviews.