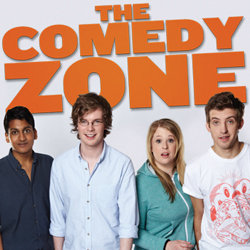 The Fringe's longest-running comedy showcase is renowned for bringing the future stars of UK comedy to its stage - Dave Gorman, Russell Howard, Al Murray and Russell Kane all started here on their rise to the top. Be the first to catch this year's electrifying rising talent - Kieran Boyd (Live At The Electric, BBC Three), Hayley Ellis (XFM Manchester Breakfast Show), Ahir Shah (The Hackney Empire New Act of The Year 2009 finalist) and Mark Smith (The Sun's Comedy Pick 2012).

The Comedy Zone, the Fringe's longest running and most prestigious stand-up showcase, is back for its 22nd consecutive year with four of the freshest acts on the circuit.

Recognised as the place to catch the best new stand-ups on the Fringe, The Comedy Zone has helped launch the careers of Dave Gorman, Harry Hill Russell Howard, Russell Kane, Al Murray, Ross Noble, and Chris Ramsey amongst others.

This year the line-up stars: Kieran Boyd; semi-finalist in both So You Think You're Funny, Amused Moose Laugh-Off and one third of acclaimed sketch trio WitTank. Hayley Ellis; semi-finalist at Funny Women 2010 who can currently be heard on XFM's Breakfast Show. Ahir Shah; finalist at the Hackney Empire New Act of the Year and Mark Smith; finalist of So You Think You're Funny, regular presenter for MTV2 and one half of double-act Dregs.