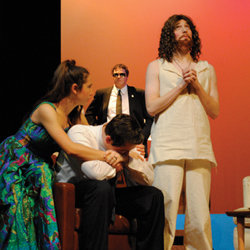 Set in San Francisco in 1969, Moliere's hilarious farce, Tartuffe, follows a Father Knows Best household's fateful tangle with a shady Maharishi and his posse of hippies. Chaos ensues as Tartuffe, our faux guru, attempts to seduce Elmire, the wife of his native mark Orgon, while the family unites to expose the charlatans perfidy. After much craziness, virtue triumphs, Tartuff faces justice and Orgon realizes how much he really does value his fabulously new-age ménage. The good end happy and the bad, unhappy. The performance is preceded by a multi-media flashback to the 60s.