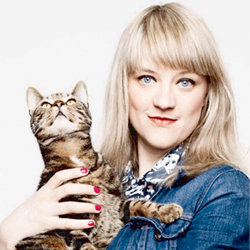 In this Faustian epic of middle-class proportions that opens with an unsuccessful casting for a Tena Lady incontinence pads commercial and closes catastrophically in a cement mixer, stand-up comedian Tania Edwards examines just how far we should go to get ahead. Hotly anticipated new show from five times comedy finalist Tania Edwards (including Hackney Empire NATY). 'Hilarious' (ThreeWeeks). 'Born to perform' (List). 'Very talented' (Time Out). 'Urban sharpster' (Stage). 'One to watch' (Chortle.co.uk).

Earlier this year Tania Edwards attended a casting for a Tena Lady viral which made her stop to question her path in life. Was this where she was meant to be? Had she made the right life choices? And if not, who could she blame? At around the same time she was approached by a cunning Producer who was determined to reshape her; but into what exactly?

In this twisted comedy of errors, Tania examines what it means to get ahead, and finds out how far she is prepared to go to get there. But are her wild attempts to transform her world personally and professionally destined to succeed, or doomed to failure?

This is the hotly anticipated new show from stand up comic and writer Tania Edwards (Stand Up for The Week, Channel 4), who has been a finalist in the Hackney Empire NATY, Amused Moose, Leicester Square NATY, Latitude Festival NATY and Funny Women competitions.