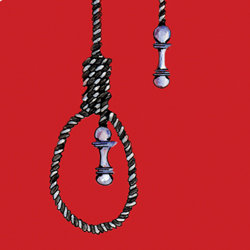 Languishing in a police cell for murder by plastic gun, Joe McBride awaits a trial in which the 'victim' will stand witness. Ten-year-old victim Charlotte swears blind she isn't dead! Unfortunately for Joe, the police agree. Without further ado everyone picks sides mostly for the prosecution, with the defence consisting of Joe, his fiancé, and Charlotte's mother, who fancies the defence lawyer and so forgets her daughter. With morals quickly lost in farcical black comedy, it is the audience who will decide if Joe lives or dies.