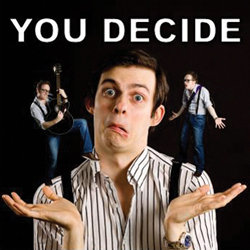 Award winning Manchester-based comedy double-act Sid Wick and James Bennison return to the Edinburgh Fringe for their 3rd year. This year, James has been charged with three bizarre crimes, and it's up to his defence attorney, Sid to get him off. The trail is conducted throughout the hour, the audience serving as jury.

Watch in horror as James unashamedly confesses to his crimes, unwittingly serving as the prosecution to Sid's defence. As James sporadically insists on his innocence, Sid is forced parade a multitude of unsuitable witnesses and increasingly implausible evidence in a desperate attempt to triumph in the no-win-no-fee case. Peppered with Slap & Giggle's notorious musical offerings, as part of their evidence, Sid and James present songs including Giving up Drinkin', the sketch-artist-drawing accompanied Broke my Heart, and a tribute to the Reggae Reggae Sauce inventor himself So Long, Mr Roots. Whilst attempting to win James' case, Sid must face his transgender demons, James must move on from his historic single 'night of passion', and both must work together to evade the law.

Beneath their purposefully idiotic exterior lies a witty, cutting intelligent edge, reminiscent of the classical vaudeville approach, with added modern bitterness, tragedy, and obscure perspectives thrown into the mix. This rare approach has led to regular guest appearances on BBC Radio Manchester, along with 4 previous sell out shows, a world tour, all of which the critics and audience have agreed, were well worth the bribes exchanged for favourable quotes.