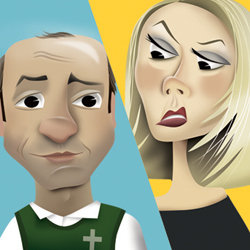 The Sitcom Double Bill. This show sees the performance of two sitcoms staged back to back. First is House Group, about a radical group of Christians who believe the church of the 21st-century should be in our own homes - God's 'casa su casa'. Join them in their mission to bring the good news to the world. Well, Paignton. Second up is The Deborah, about a middle-aged control freak who's trying to take early retirement. Deborah - and all those around her - are about to learn it's hard work doing nothing...