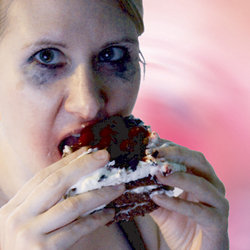 From the exasperated instructor of a doughnut-gobbling fitness group, to an elderly Welsh classroom assistant with an unusual take on education, seven wickedly surprising shorts for seven deadly sins. 'Forget whatever else you have planned - go and see this brilliant show!' ***** (WhatsOnStage.com). 'Carly Tarett's skilled writing and versatile delivery call to mind Joyce Grenfell... outstanding ... outrageously rude ... all-round excellent show ... a writer and performer to watch out for' (UKTheatre.net).

A woman with an unusual new lover, a Welsh classroom assistant with an alarming take on education, the touring singer-songwriter who can't even be bothered to finish her own lyrics, and more.

7 surprising and wicked comic shorts (including monologue, monopolylogue, and song) written and performed by Carly Tarett.

Carly Tarett trained as an actor at the Oxford School of Drama. She regularly appears for Comedysportz Manchester improv troupe, and as a writer / performer on the Canadian fringe circuit. Carly recently reworked her first piece from a solo show to a multi cast piece; Princess Dee: The Diana Story Retold was performed by Oldham Coliseum's Acting Lab as part of the Coliseum's Wordsmith festival in May 2012.

"very funny ... a writer and performer to watch out for" UK Theatre Net

"forget whatever else you have planned -go and see this brilliant show!" What's On Stage (Reviewed at the Brighton Fringe)