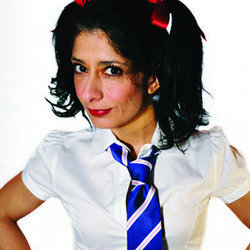 When she was little, Shappi dreamed impossibly romantic dreams. She still does. But a love affair with a rock star left her thinking what on earth she was doing, thinking and in heaven's name wearing? 'Makes live comedy thrilling' (Evening Standard).

Comedian, best-selling author and star of two series of BBC Radio 4's Shappi Talk, Shappi Khorsandi returns to the Fringe this year with her brand new show, Dirty Looks And Hopscotch. This year's offering from Khorsandi will tell the story of how as a girl she dreamed impossibly romantic dreams. She still does. But a love affair with a rockstar - what on earth was she doing, thinking... in heaven's name wearing? Dirty Looks And Hopscotch is on nightly at the Pleasance Forth at 8:30pm.

In high demand across the UK, Shappi has been touring the UK continuously to sold out theatres for the past three years including a 10 night sold-out run at the Soho Theatre in 2011. The Edinburgh favourite also had the honour of being nominated at the prestigious 2010 British Comedy Awards in the Best Female Comic category up against fellow nominees Jo Brand and Sarah Millican.

Shappi has notched up numerous high profile television appearances including; Live At The Apollo (BBC One), Channel 4's Comedy Gala (Channel 4), Michael McIntyre's Comedy Roadshow (BBC One), The Graham Norton Show (BBC One), Friday Night With Jonathan Ross (BBC One), Have I Got News For You (BBC One), The Bubble (BBC Two), and her own Comedy Store Special for Comedy Central.

As a sought-after cultural commentator, Iranian-born Shappi has also appeared on Question Time (BBC One) and Woman's Hour (BBC Radio 4) as well as penning columns for several national newspapers including the Guardian and New Statesman.

Her debut book, the critically acclaimed autobiographical A Beginners Guide To Acting English (Ebury Press) is available now in paperback.