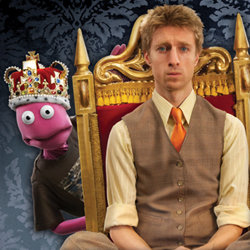 A brand new adventure from everyone's favourite multi award-winning, toe-tapping, song-singing, Hep-C-riddled duo! When Randy discovers he is heir to an enormous fortune, he seeks to reclaim his rightful throne. Will Sammy J stand in his way? Probably. Winners of Best Show at the Melbourne Comedy Festival. Creators of the 2011 Fringe hit Ricketts Lane. 'The best skinny-man purple puppet double act in the world right now' (FringeReview.co.uk). 'Sammy J and Heath McIvor are fiendishly talented writers and performers' (Scotsman).

The Fringe's favourite multi-award winning, toe-tapping, song-singing, Hep-C riddled duo are back this year with yet another hilarious, foam-induced bonanza of delightful craziness and sublime silliness.

Fresh from the Adelaide Fringe, and a new nomination under their under-sized belts, The Inheritance sees the one and only skinny-man Sammy J and his purple puppet pal Randy side by side once more in a brand new adventure. When Randy discovers he is heir to an enormous fortune, he seeks to reclaim his rightful throne. Will Sammy J stand in his way? Probably. The show is already a hit in their homeland with 5 star (Herald Sun: "I really don't know how it could be better") and 4 star (Chortle: "A fine addition to Sammy J and Randy's legacy") reviews!

Since their first appearance together in Sammy J in the Forest of Dreams in 2008, and last year's Ricketts Lane which garnered 5 star reviews throughout last year's festival, Sammy J and Randy have never looked back. Awards, nominations, countless festivals, headlining galas, sell-out shows (including lesser known venues like the Sydney Opera House), extra dates, five-star reviews... at some point they expect people will stop caring for their skinny-man-purple-puppet shenanigans, but until then, they'll keep writing shows, and The Inheritance will no doubt be their third smash hit at the Fringe.

Sammy J is fast becoming a Fringe legend and in Australia his songs can frequently be heard on TV and radio. Sammy has been involved in several productions at the Fringe over the years including his own solo shows as well as the hit theatrical production Breaker Morant alongside fellow Aussies Adam Hills and Brendan Burns. His writing regularly appears in Australian publications and Sammy's latest album Skinny Man, Modern World", is available now through iTunes.

At the 2009 Fringe Festival, Heath became renowned as one of the world's most talented puppeteers with Randy's Postcard's From Purgatory. His career in theatre, film and television spans 14 years and includes everything from visiting Cambodia to run puppeteering workshops with deaf children to playing a nine-eyed green monster called Field on last year's CBBC hit series Me and My Monsters. Randy first arrived in Edinburgh in 2008 where he popped up at a few late-night spots, and then enjoyed a month's sell-out run last year with his second hour-long show Randy is Sober.