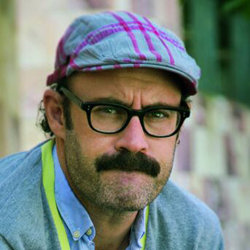 Nominee - Best Comedy, Edinburgh Fringe 2011. Australia's maestro of suburban absurdism is back. A man is standing next to another man, they have nothing in common and nothing to speak of, perhaps they can talk about the weather. Winner - Best Comedy, Adelaide Fringe 2011. Nominee - Best Comedy, Melbourne Comedy Festival 2011. One of the top five comedy moments in 2011, (Time Out). 'A breathlessly inventive psycho-comedy' ***** (Independent) ***** (Telegraph), ***** (Herald), ***** (Scotsman).

Off the back of his Foster's Edinburgh Comedy Award Best Show nomination and total sell-out run in 2011, Sam Simmons returns to the Edinburgh Fringe with his brand new show, About The Weather.

A man is standing next to another man, they have nothing in common and nothing to speak of; maybe they can talk about the weather?

In the last year alone Sam has secured Adelaide Fringe's Best Comedy Award, as well as a second nomination for Australia' most prestigious comedy prize - the Barry Award (named after Barry Humphries) at the Melbourne International Comedy Festival. He was also the only 2011 Foster's nominee for the top award from over the pond and sold out a run at The Soho Theatre in London, with Time Out London including him in their round up of the best comedy shows to see in 2011.

Since 2003, Sam has developed a style all of his own - absurd, chaotic, innovative, adventurous and constantly defying definition. Musical, visual, sometimes poignant and always hilarious, he has spent 10 years becoming an overnight sensation, building up a massive following for his surreal brand of suburban absurdist comedy.

A cult favourite on Australian radio National Youth Broadcaster Triple J, a regular all over ABC TV and the creator of an online series with the mighty cast of Neighbours, Sam has really got Australia covered. Now he has his sights on the UK so don't miss him at the Gilded Balloon this Fringe.