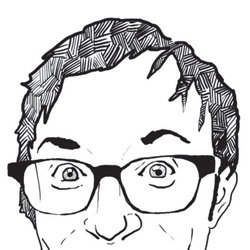 Right - so here's my first proper thing on the Fringe. I will be delivering a handsome collection of uplifting, charming drivel involving jokes, drawings, conjuring, a song about shoes, etc. 'I really like the things Fletch says and the way he says them and also I like his face' (Alex Horne).

"Right - so here's my first proper thing on the Fringe. I will be delivering a handsome collection of uplifting, charming drivel involving jokes, drawings, conjuring and a song about shoes."

Performed in a wonderfully indefinable style combing illusions, lo-fi artistry and divvy jokes, Good on Paper is a show about the universal struggle to succeed, through whatever means you decide.

The show jostles between failure and success - ultimately portraying the futility of human effort (via a song about shoes and an invention of a T-shirt that combs your hair in the morning).

In the show, Sam - an awkward indie figure - will try his hardest to display a range of skills including conjuring, illustration and song-writing - all against the fact that the show is crumbling around him. He does his utmost to succeed and, ultimately, it's his British stoicism and naivety that will get him, and the crowd, through.

Upon graduating from the Royal Welsh College, Sam was cast as Supervacuo in The Revengers Tragedy at Manchester's Royal Exchange Theatre. A talented comic actor, he followed this with television roles in Shameless, Ideal, Big Top, Bellamy's People, Coming Of Age and White Van Man.

He has recently completed and co-developed a 30 minute pilot sketch show for the BBC directed by John Hopkins and featuring Lizzie Daykin, Thomas Nelstrop and Hughes and himself.

An uplifting, idiotic, charming hour that is shonky, wonky but beautifully and endearingly so.