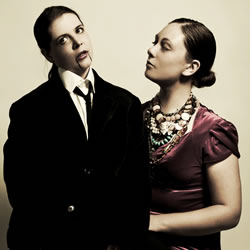 Watch out Edinburgh, a brand new female (*gasp*) double act are heading up to the Free Fringe (*gasp* again) this August with a debut character sketch show that will have every audience member saying Well Done You.

Two of the founding members of critically acclaimed musical impro comedy Showstopper! (also appearing at the Fringe this year), Ruth Bratt and Lucy Trodd, have decided to go it alone with an hour of stimulating silliness and deliberately discomforting characters, unintentional impro and delightfully dark dispositions.

Trodd en Bratt met on the improvised comedy circuit in 2007 and they have worked closely together ever since, including playing identical twins for 50 hours non-stop in Pack up Your Troubles, The London Improvathon 2008, Dick and Dom's Funny Business (CBBC), and they co-host Newborn, a monthly new material night at the Leicester Square Theatre in London with Pippa Evans and Cariad Lloyd, while also working with Pippa in writing trio Triple Threat.

Following her formative years improvising at the Royal Court with Ken Campbell, Lucy performed in eight Improvathons (including the 53 hour Soap-A-Thon in Canada), as well as being a founder member of Showstopper! credits include Fast & Loose (BBC2), Doctors (BBC1), Basil Brush (CBBC), Be Our Guest (Pippa Evans' new pilot), Goodyear (comedy viral), and most recently she filmed The Auditions, a comedy pilot for MTV. Lucy's play Burnt Salad was performed at the Soho Theatre, and she is currently developing her sitcom, Twitching.

Most recently, Ruth appeared in the pilot for Ricky Gervais' new sitcom Derek (Channel 4), a role which may well be reprised should the series go ahead. She voiced several characters in both series of Mongrels (BBC Three) and was Marion in Sarah Millican's Support Group (Radio 4). Credits include: Fast & Loose (BBC2), Doctors (BBC1), Lee Nelson's Well Good Show (BBC Three), Rob Brydon's Annually Retentive (BBC Three). Ruth is no stranger to the Fringe. In 2008 she brought up her first one-woman show And On Your Left...Ruth Bratt, and, Showstopper! aside, has also performed in and produced The Reduced Edinburgh Fringe Impro Show with her company, Scratch, as well as co-starring with Kirsten O'Brien in Lesley's Lunch Hour.