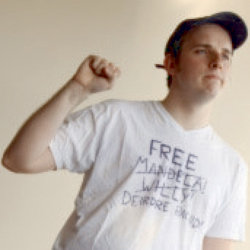 Protest singer, Jerry Bucham, wants to do his bit for the planet. The only problem is, he doesn't really keep up with the news. Still, there's no harm in having a stab at it. Armed with his guitar he aims to save the world one song at a time. Star of the BBC's Jesting About and the Laughing Horse New Act Competition, and writer for The Now Show, The News Quiz, Dave Gorman's Pub Olympics and more. 'One of the best new comedy writing talents around' (Chris Addison). 'Really funny ... excellent' (Josie Long).