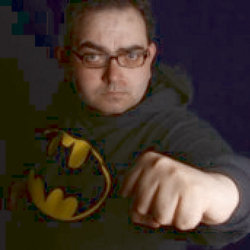 Rob Deb, AKA The Dork Knight, a regular in SciFiNow, host of Sci-Fi London comedy nights, brings his humour, wit and stand-up comedy to great heights whilst riding his hobby horses of geekdom into the depths of Hell. He even went on a date! Bring your cape, bag and slab your comics for a vintage hour of comedy capes'n'japes. Warning: Twilight and Manga fans will be offended. Twitter - @RobDeb. www.myspace/comedyrob. www.laughinghorse.co.uk. www.facebook.com/comedyrob.