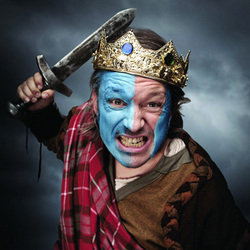 The 'King of Edinburgh' (List) returns for his 25th anniversary Fringe to interview more Edinburgh stars and showcase the best new comedians. Improvised comedy chat and serious chat about comedy. A different show every day, yet reassuringly exactly the same. Last year's guests included Sarah Millican, Adam Buxton, Al Murray and Omid Djalili. Each episode appears on iTunes and The British Comedy Guide on the day to provide Fringe taster for those not lucky enough to be here. But come along for prizes, free tickets and interaction with Edinburgh's top stars and its reluctant monarch!

Listen to the Podcasts