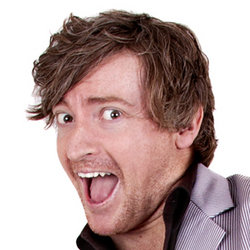 Murray from Flight of the Conchords and star of ITV Mad Mad World. Some say the world could end in 2012. But Rhys Darby has a plan. He's fairly sure the superpowers each have a spaceship ready to launch on the eve of Armageddon. The trick is... to get onboard! 'He's just absolutely brilliant. He's got that Peter Sellers madness inside him' (Jim Carrey). 'The more important question was, is he as funny without the Conchords? The answer is a resounding yes!' (Perth Now). 'Endearingly surreal ... thoroughly enchanting' **** (Metro).

It's 2012 and the world has ended. Rhys Darby wakes up onboard a spaceship. It would appear he's one of the lucky ones. A V.I.P ? Who knows? Only Rhys can figure out how he managed to survive the armageddon, by looking back at his madcap journey through life. In this brand new show Rhys takes us on an autobiographical journey from meek geek to king of cool. This show is a handy guide to living your life like you're the champion no one has heard of. In the end, you might just find you've been invited to re-colonize another planet.

This Way to Spaceship recently won New Zealand's highest comedy honour by picking up The Fred Award for best show in New Zealand International Comedy Festival. It will be flying into this year's Edinburgh Festival, following Rhys Darby's first ever UK tour and a sellout run at London's Shepherds Bush Empire.

The show promises to combine everything Rhys is known for, surreal musings, hilarious stories from his life and a healthy dollop of nonsense and fantasy.
This Way to Spaceship is also an adaptation of Rhys' debut novel 'a handy autobiographical end of world companion'.

Best known for his brilliant portrayal of Murray Hewitt in Flight of the Conchords, Darby was based in the UK as a standup comic for 8 years before making the move to the USA.

He is known for his roles in Yes Man, opposite Jim Carrey, and The Boat that Rocked. He has appeared as the lead in two romcoms, Lovebirds, opposite Golden Globe winner Sally Hawkins (out on DVD now) and Coming and Going opposite Sasha Alexander (NCIS, Rissoli and Isles).

Rhys Darby can be seen in the new ITV1 show Mad Mad World as a team captain, hosted by Paddy McGuiness. This new eight-part series, focuses on 'fun news stories, events and TV clips from every corner of the globe'.

Whilst basing himself between NZ and LA with his young family he has written a book, starred in a now defunct US network sitcom, released his second stand-up DVD, It's Rhys Darby Night, and learnt to drive an amphibious boat.