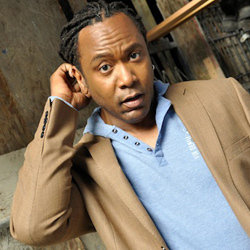 'Punchy delivery and comic timing to die for' (List). 'Nearer the knuckle than an over-sized sovereign ring' (Metro). 'Mesmerising delivery' (Chortle.co.uk). 'Consistently at his best delivering dry and unexpected observations' (Edinburgh Evening News). 'Comic timing is sharp enough to burst balloons' (Independent). 'One of the most skilled, powerful, charismatic comic performers around' (Scotsman). 'Reginald D Hunter joins the top rank of stand-up comedians working today ... flying in the face of received opinion in a way that is simply exhilarating ... this is comedy of a rare scope' ***** (Times).

Reginald D Hunter returns to the Edinburgh Festival Fringe this year following a hugely successful tour of the UK and the launch of his debut live stand up DVD.

In just over a decade since he began performing, Reginald D Hunter has become one of the UK Comedy industry's best-known and most distinctive performers. His work is often brutally honest, frequently controversial but always meticulously measured and thought out.

He is one of the few performers to have been nominated for the highly coveted main Perrier Award in three consecutive years and has become a well-known face on primetime television shows such as Live At The Apollo and QI and is a frequent guest on Have I Got News For You.

A regular performer at the Edinburgh Festival Fringe since 2002, Reginald's career has led to him being invited to perform in venues the world over in places such as Singapore, Hong Kong, Thailand and South Africa.

Reginald has performed at The Sydney Comedy Festival and The Melbourne Comedy Festival. He is also a well-known face on primetime television shows such as 8 Out Of 10 Cats, Never Mind The Buzzcocks and QI and is a frequent guest on Have I Got News For You. He has recently appeared in Argumental for Dave Channel and Would I Lie To You? for BBC1. He also starred alongside Andy Hamilton in BBC4's It's Only A Theory and appeared in the New Years Day episode of the hugely popular Live At The Apollo (BBC1).