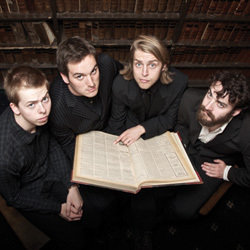 The 2011 hit returns! Four of the UK's brightest comic talents join the twinkly fingers of a virtuoso musician to create hilarious worlds of humorous invention. Aaaand Now for Something Completely Improvised is a captivating comic play based on audience suggestions - totally different every day of the Fringe. Be a part of a unique comedy experience as unforgettable characters, exciting plot arcs and hilarious situations slot together before your eyes. No.1 Improv Show at the Fringe (WhatsOnStage.com, 2011). 'Genuinely reach the heights of early Python' **** (ThreeWeeks).