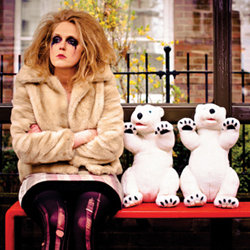 Loretta Maine returns to the Fringe with her new hour of amazing sexy woe. Fresh from trawling the comedy clubs of Britain, Loretta has new songs to sing, new tales to tell and new pain to unleash. With numbers like These Ain't My Tits and the infamous Chicken Shop, how can you even be questioning your ticket purchase? Don't you like laughing at other people's misery? You should be here. 'Wicked musical comedy in every conceivable way' (List). 'The finest female character comic around' (Time Out). 'Murderously funny' (Evening Standard). 'Brilliantly observed' (Guardian). www.lorettamaine.com.

Troubled and embittered songstress, Loretta Maine returns to the Edinburgh Fringe Festival with her new hour of amazing sexy woe. Fresh from trawling the comedy clubs of Britain, armed with a suitcase of wine and regularly propped up by her new band PenisEnvy, Loretta has new songs to sing, new tales to tell and new pain to unleash.

Loretta Maine is a singer-songwriter from Portland, Oregon. Having left school at 15, after an incident with school bully Sarah Perkins that resulted in Sarah's disappearance, Loretta found music to be a good outlet for her frustrations and began writing songs such as Makin' Love and Cock Sucking Mother Fucker.

Since moving to London in 2007, Loretta has been following her dream of becoming an international superstar. Despite her sell out Edinburgh Fringe run in 2010, with songs from her almost smash hit EP I'm not drunk, I just need to talk to you, the general public, and music industry alike, continually overlook her incredible talent. Loretta continues to write from the heart and her raw, emotional songs are some of the most powerful being performed in the UK today. Come, laugh at her misery.