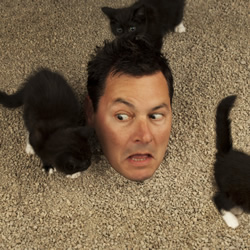 The Free Festival presents one of the UK's finest stand-up comics. Phil examines parenthood, current events and a career that has seen him win the prestigious City Life Comedian of the Year award at The Comedy Store, wowing crowds in the country's top comedy clubs and entertaining troops in Afghanistan, of which he describes, "I've played to some tough crowds but they were never armed to the teeth with machine guns! Thank God they liked me!"

We all reach a point in life where we ask ourselves this question! So come & spend an hour with one of the UK comedy circuit's finest comic talents in his fringe festival debut as he examines his take on current events, being a parent, his comedy career that has so far taken him everywhere from wowing crowds at most of the UK's top comedy clubs to entertaining troops in war torn Afghanistan (of which he describes) "I've played to some tough crowds in my time but they where never armed to the teeth with machine guns before, thank God they liked me!"

He has also won awards along the way including the prestigious City Life Northwest comedian of the year, previous winners include Peter Kay & Steve Coogan.

So is he happy with his life? Are any of us? Come along and find out, laughs guaranteed!

"As up to date as tonight's news!" The Stage.

"A ready Wit, One to watch!" BBC Leeds