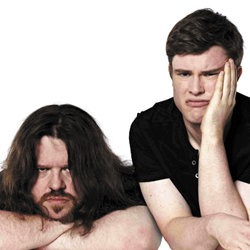 "Everybody's favourite comedy nice boys, Ray Peacock (crumbs in his beard, idiot) and Ed Gamble (big muscles, wrote this bit), return with another jam-packed hour of total idiocy and very handsomeness live on stage with their brand new show" Peacock & Gamble Don't Even Want to Be on Telly Anyway. They don't even care that they're not on telly. They don't care so much that they've prepared a whole show to prove how much they don't care, which will let everyone know how much they don't actually want to be on telly anyway.

Peacock & Gamble first came to prominence with the hugely popular Peacock & Gamble Podcast which earned the duo two Chortle Comedy Award nominations, a place in the Guardian's top-ten comedy podcasts, was featured as part of the in-flight entertainment on British Airways and led to them becoming permanent hosts of The Comedy Club (Radio 4 Extra). They will be recording a daily podcast from the Edinburgh Festival this year featuring interviews with Russell Howard, Lee Mack and Greg Davies, amongst others. The boys have both appeared on Russell Howard's Good News (BBC Three) and remain the only act to have been invited back to perform twice on the show. In 2011 Peacock & Gamble created a short film for BBC Online entitled Warm Up Man. The duo have both performed in Edinburgh Festival's longest running group-comedy The Comedy Zone.

As a solo performer Ray was part of Big And Daft - a comedy trio that enjoyed great success with three sell-out Edinburgh Festival Fringe shows and a BBC London Radio series. He created The Ray Peacock Podcast in 2007 which later become the hugely successful Peacock & Gamble Podcast. As an actor he has featured in some of the UK's biggest television programmes including Doctor Who (BBC One), Skins (E4) and Harry Hill's TV Burp (ITV1).

Ed has performed on Russell Howard's Good News (BBC Three) and Dave's One Night Stand (Dave). He has supported Greg Davies and Russell Kane on tour and has written jokes for Ask Rhod Gilbert (BBC One) and Mock The Week (BBC Two).