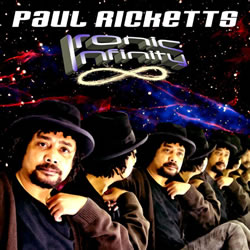 Funny isn't enough? Okay, try this hilarious stand-up show instead. Promoters, agents, fellow comics and punters have all given me advice on comedy. I've taken it onboard and written my own skewed, joke laden, view on life and comedy. This show deals with such weighty issues as consumerism, politics, race and tight trousers. 'Material is smart as well as funny. I don't think that even Simon Munnery has toyed with the concept of Ironic Infinity' (Scotsman). 'Weird and wonderful ... Ricketts should be given his own TV show.' Must See Award 2010 (Stage).

Paul Ricketts is an award-winning comic who since 2006 has been entertaining audiences across the UK and beyond. Since starting as an MC in his own London Comedy Club, Paul has developed into a much sought after performer on the comedy circuit - Comedy Store, Jongleurs, Highlight, The Stand (Edinburgh & Glasgow), The Glee Comedy Clubs, Frog & Bucket, Manchester, Off The Kerb and Up The Creek, London.

Sometimes silly, serious or surreal, sometimes autobiographical, political or near the knuckle - but always funny!

His last Edinburgh show Kiss The Badge, Fly The Flag! received the 'Must See' award from The Stage, five stars from RemoteGoat.co.uk and four stars from Three Weeks. This show was performed at Cambridge University's 'Festival of Ideas' in October and a revised version did a short run at the Leicester Square Theatre this June. In 2011 Paul did a single preview performance of his storytelling show West End Story in Edinburgh. Amazingly it was nominated for Best Free Show, Best Comedy Performance and Best Moment in the Edinburgh Darkchat awards.