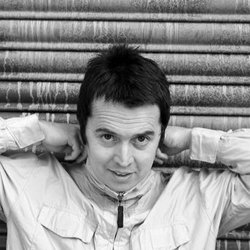 You can take the boy out of Glastonbury... Paul seeks to emulate bands reforming for 20th anniversary classic album tours by reuniting his old raving crew at a festival, with the words 'Come on Paul, you're not 18 anymore', ringing in his ears. Is this really a good idea? A hilarious, engaging hour of stand-up. As seen on Russell Howard's Good News. 'Born to be a comic' (Scotsman). 'He has charm, charisma and success written all over him' (Evening Standard). 'Likeable, animated and fluid with a first rate sense of timing' (Chortle.co.uk).

You can take the boy out of Glastonbury... Paul McCaffrey returns to Edinburgh with his brand new solo show Pill 'n' Thrills and Bellylaughs. Seeking to emulate bands reforming for classic album tours, McCaffrey reunited his old muckers to go to a festival last summer. When did matching Cath Kidston tents and wellies become acceptable practice? What is a foodie? And why does everyone keep saying "Come on it's a festival?" Grab a Red Stripe, put on your Stone Roses T-shirt and I'll meet you by the dance tent!

Last year, Paul McCaffrey took his debut solo stand-up show, Saying Something Stupid to the Underbelly, to great critical acclaim, having previously appeared as part of the Big Value Comedy Show and the AAA Stand-Up Show at the Pleasance. Paul has performed on Russell Howard's Good News (BBC Three), Russell Kane's Whistle Stop Tour (BBC Radio 2) and is a regular guest on The Matt Forde Show (talkSPORT). In 2009 he won both The London Paper and the Latitude Festival new act competitions.