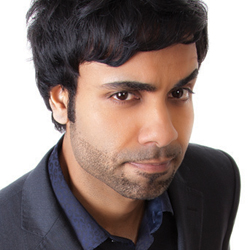 Star of Channel 4's Stand Up For The Week returns with his brand new show. Strap yourself in for this hard-hitting and unique take on modern Britain. Good clean fun for all the family. No under 16s.

Star of Channel 4's Stand Up For The Week, Paul Chowdhry returns to the Edinburgh Fringe Festival this summer with his brand new show, What's Happening White People?. Paul will be playing to audiences daily from 1st - 26th August (excluding Monday 13th August) at Pleasance Two. Strap yourself in for an hour of Chowdhry's highly charged dry observational humour tapping into the multicultural diversity of contemporary Britain.

Paul Chowdhry has been critically acclaimed as the UK's number one Asian comedian, with over an outstanding 3 million YouTube hits. Inspired by comedians such as the late Richard Pryor, George Carlin and Sam Kinison, Paul is one of the few comics with the ability and diversity to effortlessly straddle the urban and main stand-up circuits as an international headline act - with his highly charged dry observational humour tapping into the multicultural diversity of contemporary Britain.

Paul's talents extend past the realms of stand-up and he has taken numerous acting roles in high profile theatrical film releases including: Swinging With The Finkles alongside Martin Freeman and Jerry Stiller, Colour Me Kubrick with John Malkovich, Rogue Trader with Ewan McGregor and Anna Friel, and It Was An Accident alongside Thandie Newton.

In addition to Stand Up For The Week, his varied TV appearances includes: BBC One's weekly topical politics show This Week presented by Andrew Neil, Comedy Central At The Comedy Store, presenting MTV's Comedy Weekend, plus appearances on The World Stands Up and The All-New Comedy Store for Paramount Comedy Channel and USA's Comedy Central.

Paul is also set to the tour the UK this autumn including one night at the Hammersmith Apollo on 22nd September where he will be recording his debut stand-up DVD, set for release by Universal Pictures (UK) on Monday 19th November. Pre-orders are available now via Amazon

Paul will be touring the UK this autumn. Visit www.offthekerb.co.uk for further information and dates.