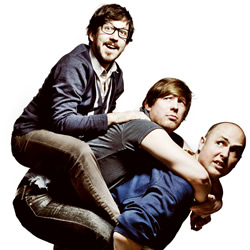 Pappy's were nominated for the Edinburgh Comedy Award (if.comedy) in 2007 for their second fringe show and, since then, have performed live all over the world. They have appeared in their own pilots for Channel 4 and Radio 4; they were the first British act to perform at the San Francisco SketchFest; and, in 2011, completed their third national tour.

Pappy's return with a brand new show full of sketches, songs and silliness. Over the past 7 years they have gone from Free Fringe upstarts to the biggest and most consistent sketch troupe in Edinburgh.

So, after a year away from the Fringe, they return with Last Show Ever. Is this really the end for "the funniest sketch troupe on the fringe"? (Scotsman)

Whether or not they are actually throwing in the towel, one thing is certain; Last Show Ever is their biggest and best show yet.

During their year off from the Fringe they launched two hugely successful podcasts. Pappy's Bangers and Mash was named iTunes best new comedy podcast of 2011 and Pappy's Flatshare Slamdown won the Loaded Lafta award for Funniest Podcast. They will record 4 new episodes of Flatshare Slamdown live at the Pleasance Upstairs at 11:20pm on the 5th, 6th, 7th & 12th August.

They also wrote and hosted their own gameshow for Channel 4, the Mr and Mrs Hotty Hott Hot show, and separately appeared in TV shows such as 8 Out Of Ten Cats, Meet The Parents, Miranda, Never Mind The Buzzcocks and Watson & Oliver. But 2012 sees them back doing what they do best: returning to the Fringe to perform peerless live sketch comedy.