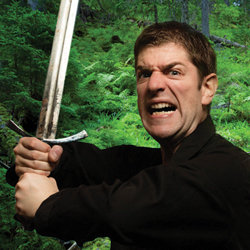 100,000 characters. Nine companions. Three masterworks. One man to do it all. Armed with nothing more than a pair of elbow pads and his outrageous imagination, Canadian actor Charles Ross recreates the enchanting world of Middle-earth in a show that took the Fringe by storm when it debuted in 2009. No props are required as he hurtles through the Tolkien trilogy in just 3600 seconds of unbelievable kinetic entertainment. If you've seen the films, read the books and named your first-born Frodo, you won't want to miss Ross's zany take on the ever-popular saga.