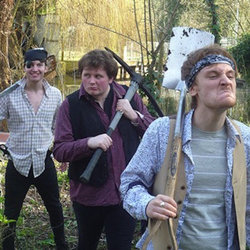 Storytelling performed on the following days in August 2012...

This year, Sleeping Trees are in pursuit of treasure ... if they can remember where it's been buried. Not Treasure Island tracks the treacherous expeditions of Billy Bones and Long John Silver, two of the most feared and despicable pirates on the sea, as well as the quest of young cabin boy Jim. With squids, merman, fires and fishermen all brought to life, and with only a vinyl record player for company, Sleeping Trees bring together a version of the story the likes of which have never been seen, even by the most ravaged of nautical peepers.