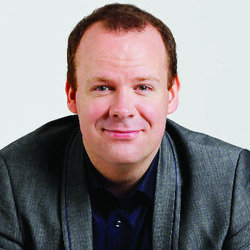 Newspapers said by now Neil'd be mature. Why don't he, his biker nemesis or the chicken-killing people in his flat agree? 'If you've yet to see Delamere live, make this the year ... a master.' ***** (Scotsman).

One of the most in-demand comics on Irish Television, Neil Delemare is returning to the Edinburgh Fringe Festival this August with his highly anticipated brand new show, DelaMere Mortal. Catch the Irish Funny man nightly throughout the Fringe at the Pleasance Above at 9:00pm. No gimmicks, no hooks, this is simply comedy at its finest and most intelligent.

Neil is currently one of the biggest names on the Irish comedy scene thanks to his regular appearances on RTE's The Panel and taking over from Ed Byrne to present Just For Laughs in which he interviews fellow comedians at the Montreal Comedy Festival in his own charming County Offaly lilt.

You may also recognise him from this side of the water after his guest stints on Michael McIntyre's Comedy Roadshow (BBC One), Stand Up For The Week (Channel 4) and Comedy Central At The Comedy Store, as well as regular appearances on BBC Northern Ireland's weekly comedy panel game-show, The Blame Game.

With his likeable manner and proneness to flights of fancy, Neil takes joy in the mundane aspects of life, rendering them hilarious to his audiences. This is proven by the successful 5 star rated tours of his Bookmarks and Crème Delamere shows, which have taken him to the Montreal Just For Laughs Festival, the Melbourne International Comedy Festival and the Edinburgh Fringe Festival as well as performances all over Ireland and at the prestigious Kilkenny Cat Laughs festival. Between his riffs on the everyday weird occurrences in his own life and his delight in direct crowd interaction and rapport Neil's stand-up is equally genius on and off script.

If you need any more assurance of this Irish man's charm and wit, then check out his DVDs: No Message (2007) and Crème Delamere (2009), which have achieved platinum status, before heading up to see the man himself. Neil's third DVD, Implement of Divilment, was released in autumn 2011.