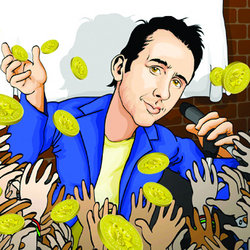 'Gloriously entertaining' (Chortle.co.uk) stand-up gives you £1 during his groundbreaking new show. It's about money, generosity, and a man who saved his whole life for a day that never came. 'Amongst the most astonishing, tear-inducing sights at the Fringe' (Jay Richardson, Festmag.co.uk, 2011). 'An incredible act, gloriously entertaining through sheer energy and chutzpah' (Steve Bennett, Chortle.co.uk). 'The most offensive joke is charging people' (Kate Copstick, Scotsman, 2010). From the creator of I am Orig, the funny, uplifting documentary of a year giving money away (at a cinema near you!) and Sir Michael Caine Award-winning writer.