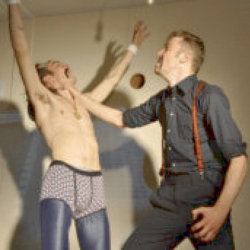 Join former wrestling hero, Captain Reality, as he returns from a 10 year hiatus to face his old nemesis, Black Dog. In a bitter no-holds-barred grudge match. This time though, has Reality got what it takes to defeat him? Has he finally laid his demons to rest or will they haunt him once more, and is he risking losing more than just his championship belt and handlebar moustache but also his sanity? Bold, imaginative, heart warming and just a little bit mad, this show is a real treat to behold.