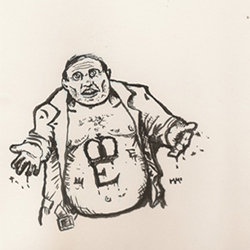 Who was the American that came to London for the love of a Queen, only to end up as a skeleton in St. James's Park? Meet Robert James Moore, far from home and without his medication. A new play from Mike McShane, with Mike McShane as Robert James Moore and Suki Webster as the United Kingdom.