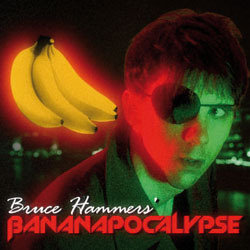 Mat Ewins presents a fun sketch/character show about the rise and fall of legendary movie star Bruce Hammers and his 1982 action blockbuster Bananapocalypse. Which definitely was a real film that happened. Discover an actor and style of comedy you never knew existed, but won't be able to forget. 'Never far from a solid punchline' (Chortle). 'Made no attempt to explain where the rest of the cast were, simply claiming they were dead' (ThreeWeeks).