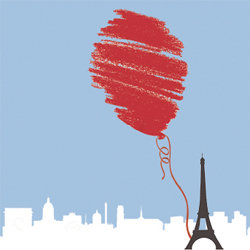 The heart-warming story of a small boy who befriends a red balloon with a mind of its own in the streets of Paris. Follow them on their adventures as they get to know each other, helping and protecting one another through laughter and danger, running from bullies, going to school, and meeting other balloons. Inspired by Albert Lamorisse's film, The Red Balloon of 1956, and performed through song, dance and clowning, the story will delight children and adults and make you think twice before popping a balloon ever again.