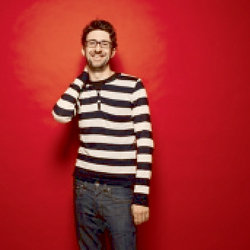 The world has never had such free access to information. Is the internet making us better or worse, smarter or more dependent? Mark Watson, as seen on BBC's Live At The Apollo, Graham Norton, and Michael McIntyre's Roadshow, considered these questions, then stopped considering them long enough to come up with a barrage of jokes, stories and observations. He presents the results of this in a new show. 'A kind of unstoppable funny superhero' (Sunday Times). 'A hilariously funny master of the comedy of mild complaint' (Theage.com.au). Email markwatsonspreview2012@gmail.com for pre-show briefing.

Mark Watson recently lost all his money to an online scammer called 'Mark Watson'. He was publicly attacked by a fellow comedian and received several hundred hate messages on Twitter. He had a mortgage offer revoked because the building society found out he was a comic and ruled that this was not a real job.

All this has led him to think about the effects of the modern information age on the average man. When Mark was at school, he learned times tables and capital cities; his two-year-old will soon have an app that supplies them. He lived in a universe that was still mysterious; now nearly all those mysteries have been exploded by search engines, smart phones and Lady Gaga. He used actual money to pay for things - now almost all money is virtual, as are our address books, our airline tickets, probably soon our toilets.

But is all this information making us better or happier? Now and again we manage to start a revolution in Iran using social networking sites. Mostly, though, we do the same old crap as ever - Sudoku, dancing shows on TV - but just with more tweeting. How can we use the age of The Information to improve our lives?

Mark's new show tackles this problem, as well as revealing the biggest lie he's ever told, showcasing his new musical talents, and taking a vicious revenge on that mortgage broker. There is also an extended routine about ham, in case anyone feels things are getting too serious.

The Information also takes Mark's celebrated 'unusual beginnings' fetish a step further, by allowing audience members to interact with him before he is even in the room. It sounds unlikely, but that's the modern world.

Well known as one of the hardest-working stand-ups, Mark Watson has also found time to write four books including Eleven which was published by Simon & Schuster. His new novel The Knot will also be published by Simon and Schuster this autumn.

Host of Mark Watson Kicks Off (ITV4) and We Need Answers (BBC4), his other TV credits include: Comedy Rocks (ITV1), The Comedy Annual (ITV1), Never Mind The Buzzcocks (BBC2), Michael McIntyre's Comedy Roadshow (BBC1), Channel 4's Comedy Gala (Channel 4), Would I Lie To You? (BBC1), Have I Got News For You (BBC1) and Mock The Week (BBC2).