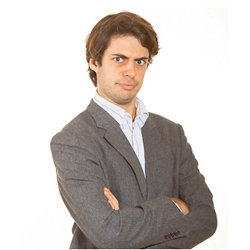 Mark is a part-time teacher of geography. He's not boasting, he just is. And seeing as the kids are always laughing at him he's decided to return to Edinburgh to perform in a cave, a geographer's natural habitat. In his debut stand-up show, WitTank's Mark (Sir) sets out not so much to question the stereotypes surrounding this most fabled of professions, as to emphatically reinforce them. Expect elbow pads. Chortle Best Newcomer nominee 2012. Runner-up, Loaded Laftas 2011. Star of BBC3's Live at the Electric with WitTank. **** (List). 'Professorial' (Londonisfunny.com).