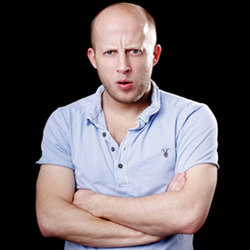 Marek Larwood is best known as one third of We are Klang, star of Fast and Loose BBC2 and Sorry I've Got No Head, BBC1. This is his debut Edinburgh solo show, in which he will attempt to overcome the stigma of being typecast. Marek is a firm believer and understander of mankind, this show will simultaneously cure all sexually transmitted diseases and also racism. Please bear in mind that none of the proceeds whatsoever will go to charity. Marek is very proud of this fact.

Marek Larwood is best known for being one third of If.comedy nominees We are Klang, star of Fast & Loose (BBC2) and Sorry I've Got No Head (BBC1).

But earlier this year, he committed the cardinal sin of googling himself - only to discover that the top search term was this. "Marek Larwood Retarded".

This left him with two choices - kill himself or write a show about it. At the time of writing this, he intends to do the latter and combat this vicious typecasting once and for all. Since playing a backwards sidekick in We Are Klang, Marek has been inundated with castings for backwards butlers, backwards undertakers and backwards aliens. But underneath the exterior of a man willing to suck from Greg Davies' under washed nipples, Marek believes there is a swan trying to get out. In this show he will prove that he is one of the greatest actors, stand-ups and panel show members of all time. After watching him in action, audience members will immediately shit themselves, then want to have sex with him, then shit themselves again. Once you're typecast, it can be pretty hard to escape - even the quotes we're using for this release are guilty of conforming.

See? In addition to combating typecasting this show will simultaneously cure all sexually transmitted diseases and also racism.

As an award-winning solo stand-up Marek has made a number of television appearances in shows including Felix & Murdo (Channel 4), Function Room (Channel 4), Extras (BBC2), Sorry, I've Got No Head (BBC1), Music Hall Meltdown (BBC Four), Hyperdrive (BBC2), Rush Hour (BBC 3), Laura Ben & Him (ITV2) and the feature film Magicians. Marek makes his own no budget films on his website. He is assisted in this show by Sophie Black (Fat Tongue, The Year Ahead, Ch4)