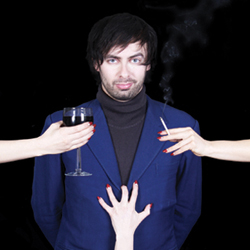 Witty, acerbic Frenchman seeks audience for one hour only for fun, adventure, maybe something more. Must have own underwear and socks and breath, but be prepared to have these charmed off, laughed off and taken away respectively.

Having proved his prowess as a chat show host, Marcel has ditched all other performers from his show, and is now treating Edinburgh once again to a full hour of himself. Lucky Edinburgh. The show features the usual superb blend of chansons (including the instant classic Continental Breastfest), poetry (an exclusive reading from his new collection Sex And Secularity) and some translated teenage diary readings.

Monsieur Lucont will also be dabbling with some new musical styles, and attempting some character comedy, in the form of an English character he has been working on.

All-in-all as much a treat for regular Marcellites as for newcomers to Monsieur Lucont's oeuvre; prepare to be charmed by this Frenchman regardless of your gender and sexual preference.