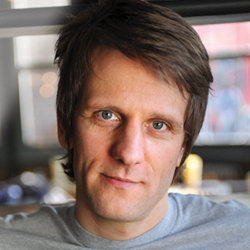 Perrier nominee, a 'gifted comic' (Sunday Times), and writer for comics appearing on Live at the Apollo, Michael Mcintyre's Comedy Roadshow, and Mock the Week, presents a 'gimmick-free hour of rock-solid comedy' (Chortle.co.uk), about the two women in his life- a French actress girlfriend, and an eight year old daughter from a previous relationship. He's never won an argument with either, and it's time to set the record straight.

Perrier award nominee Luke Toulson returns to the Edinburgh Festival Fringe with an uplifting brand new solo show about love, living with two women and lying to your kids, Luke Who's Talking at the Underbelly in Cowgate.

Meet the two women in Luke's life: a French actress girlfriend and an 8 year old daughter from a previous relationship. Discover the ridiculous situations in which he finds himself whilst trying to balance a new romance with keeping his mischievous daughter happy. Now 35 and with his new found sobriety, how can he still be the life of the party? Spicing up a game of Hide & Seek is one answer, and a 'win at all costs' attitude is another, even if one of the people you're playing against is your girlfriend, and the other is under ten!

Alas, these are two strong women and Luke has never won an argument with either - so now it is time to set the record straight.

Having been nominated for the Perrier Award for his double act with Stephen Harvey, Luke Toulson is now a critically acclaimed comic in his own right, who has performed on BBC Radio 4 & 5, written for comics appearing on Live At the Apollo, Michael McIntyre's Comedy Roadshow and Mock the Week, and directed Pippa Evans' debut if.comedie award nominated show.