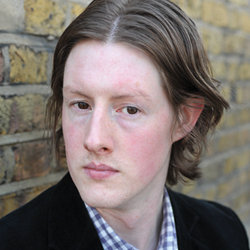 Two-time Comedian of the Year nominee's much anticipated debut show. Ever been stalked? The Geordie Giant brings you a joke-filled hour about petty acts of heroism 'He looks the part, he's got the talent' (Sunday Times).

Two-time comedian of the year nominee, Luke Benson stars in his debut stand-up show Backseat Hero at the Pleasance during the Edinburgh Festival Fringe this August.

Luke Benson is a rubbish hero. There's a lot against him being a good one: Unfortunately, his home planet has not been destroyed by a death ray, although Margaret Thatcher gave it a good go...and he's only being hotly pursued by a taxi driver gone mad.

See an all action, all riotous story of stalking unravel... Luke's account of an accident with a bike, a taxi and an unnamed car sets the wheels in motion for a highly energetic, entertaining tale.

This is a David and Goliath story - but this time Goliath is the hero!

Geordie giant, Luke Benson is an incredibly talented stand-up comedian, making waves on the circuit since 2007. He has been a finalist in the Hackney Empire, Amused Moose, Leicester Square Theatre and Mirth Control competitions. He was also nominated for the Leicester Mercury New Comedian of the Year Award.

Luke has an incredibly appealing stage presence and his set is a mix of hilarious stories, original one liners and inventive word-play. He's performed at The Comedy Store, Banana Cabaret, Just the Tonic, Frog & Bucket, Amused Moose, CKP, Highlight, Komedia, The Stand, XS Malarkey, Mirth Control, Up the Creek, Downstairs at the King's Head, Spank! and many more. He has a regular show on Shoreditch Radio called The Benson & Proudfoot Show and has appeared on Channel 4, Capital Radio, Phoenix Radio and has performed and written for Virgin Radio.