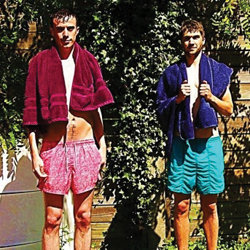 Luke and Harry perform fifteen nearly realistic sketches detailing an unhealthy home life. Luke finds love at a Toby Carvery, Harry has a bath with his granddad. They don't have props and probably won't do a song. Last year they did something similar with very good results. 'One to look out for' (Camden New Journal). 'Amiable ... macabre' **** (ThreeWeeks). www.lukeandharry.tumblr.com.